Skip to content
Learn about our Session Series Discounts 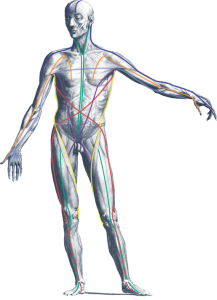 From my treatment table: A blog series related to what I’m seeing in the bodies of my clients, and the treatments related to those findings.

In the last installment entitled “An overview of what I do” I explained the genesis of this work ( in a very precursory way) which I’m hoping gave you a general idea of the orientation used to assess and treat the body in this form of bodywork now known as Anatomy Trains Structural Integration.

In this installment I want to discuss an anomaly I’ve been seeing consistently in my practice which has significant ramifications for the well-being of any body- that anomaly is posterior tilt of the rib cage, also known as sway back posture. 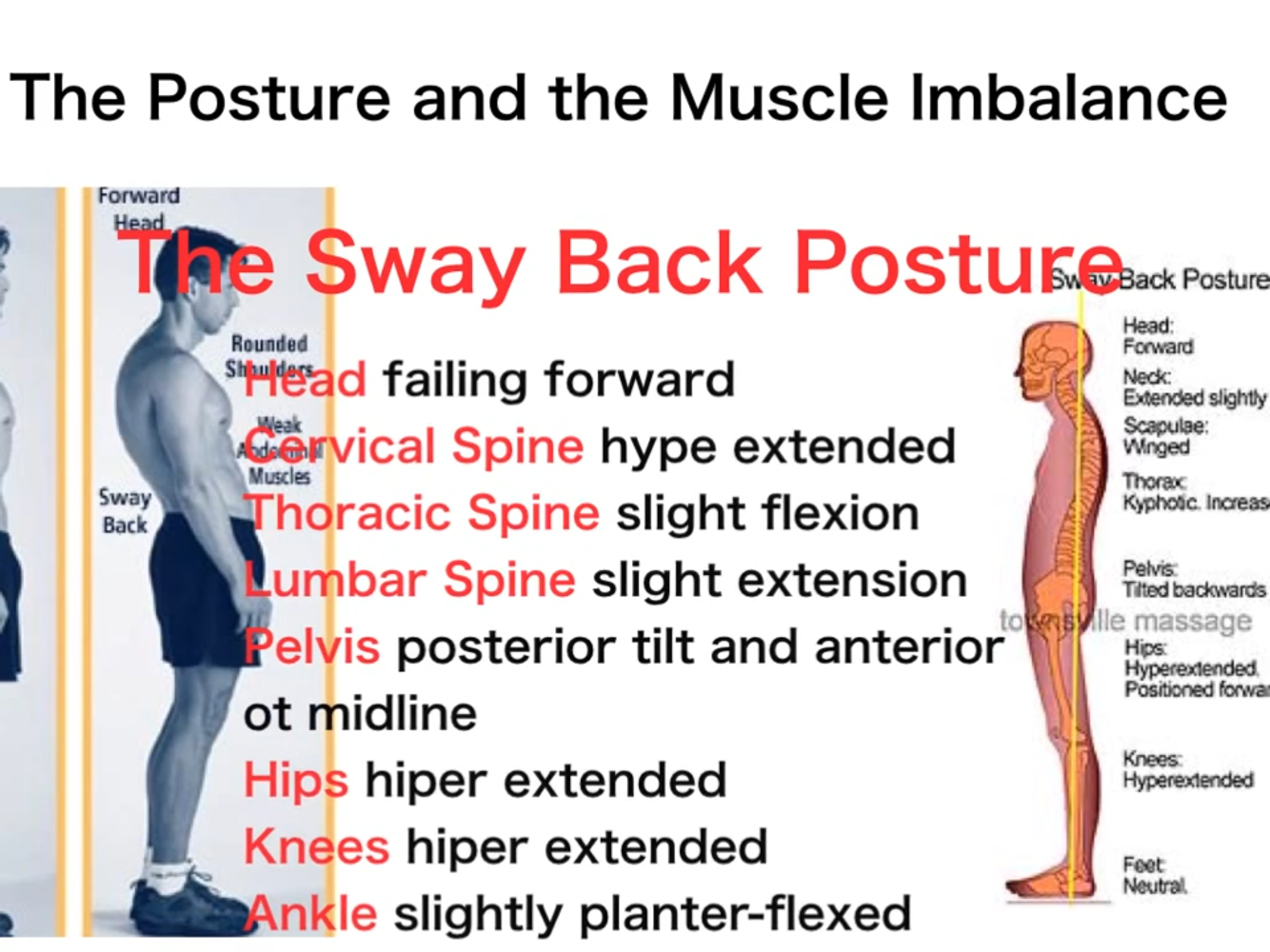 This is an interesting anomaly in that it is created by a shortening of two major vectors of force in the human body – The Superficial Back Line and the Deep Front Line. 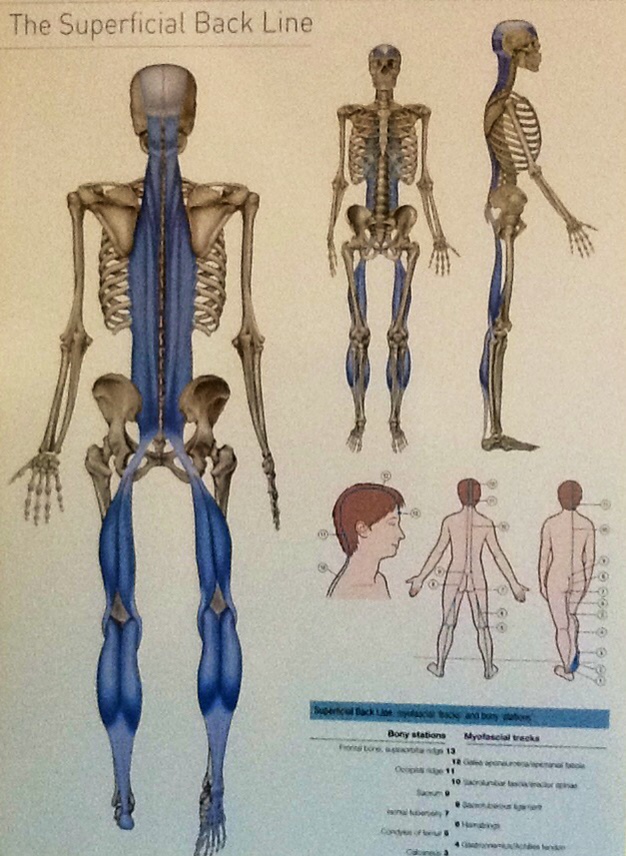 The Superficial Back Line (SBL) runs from the soles of the feet up the back body to just above the eyebrows. Among other functions the SBL balances the lines of pull created by the musculature on the front of the body known as the Superficial Front Line (SFL).

It’s the SBL myofascial continuity which creates the curves in our spine. When we’re born we have been in fetal position for about nine months. Therefore we have been shaped like a ball, this shape is known as a state of spinal flexion. The fist curve in the opposite direction, known as extension, is developed by the baby lifting its head. This is known as cervical spine extension. The second curve created by the strengthening of the Superficial Back Line is the low back or lumbar curve, known as lumbar spine extension. This is developed as the baby develops enough strength in the arms and shoulders to push itself up from the surface it’s on.

When the SBL is in a state of hypertension it has the ability to wreak havoc on several bony structures in the body. Starting at the feet, it can be the cause of, or major contributing factor in, plantar fasciitis, Achilles‘ tendon issues, bone spurs, and claw foot to name just a few. In the knees it can be a major factor in a variety of issues including medial (inner) meniscus mal-alignment which often leads to tearing of the medial meniscus, as well as damage to the medial collateral ligament, which is historically the most common ligament injury for us humans. On the outer knee hyperextension in the SBL can cause or contribute to outer meniscus issues due to compression of the joint capsule and misalignment of the knee joint, as well as issues in the fibular head articulations which lead to pain in the outer knee or knee joint while running or hiking.
These are just a few of the knee issues caused by hypertension in the SBL.

In the hip area hypertension in the SBL often causes the pelvis to be posteriorly tilted due to the hamstrings being very tight which can be a challenge for the hip joint capsule as the posterior tilt of the pelvis means the joint capsule is not in ideal alignment for the femur (thigh bone) to articulate. This leads to uneven wear in the cartilage and potentially to hip replacement. These are just a few ways the malalignment caused by hypertension in the SBL cause hip issues.

In the back which is our main area of concern for this article, the hypertension in the erector spinea group, aka spinal muscles, creates a shortening of the whole spine, (think accordion when you push the air out), this can and does cause degenerative disease in the discs between the vertebrae. This is very important because in between each vertebrae is at least one nerve bundle exiting the spinal cord to deliver electrical impulses to the musculature, the most famous of these being the sciatic nerve which tends to exit between the 4th and 5th vertebrae of the lumbar spine, (think very low back).

This visual shows the issue so many of us are dealing with. 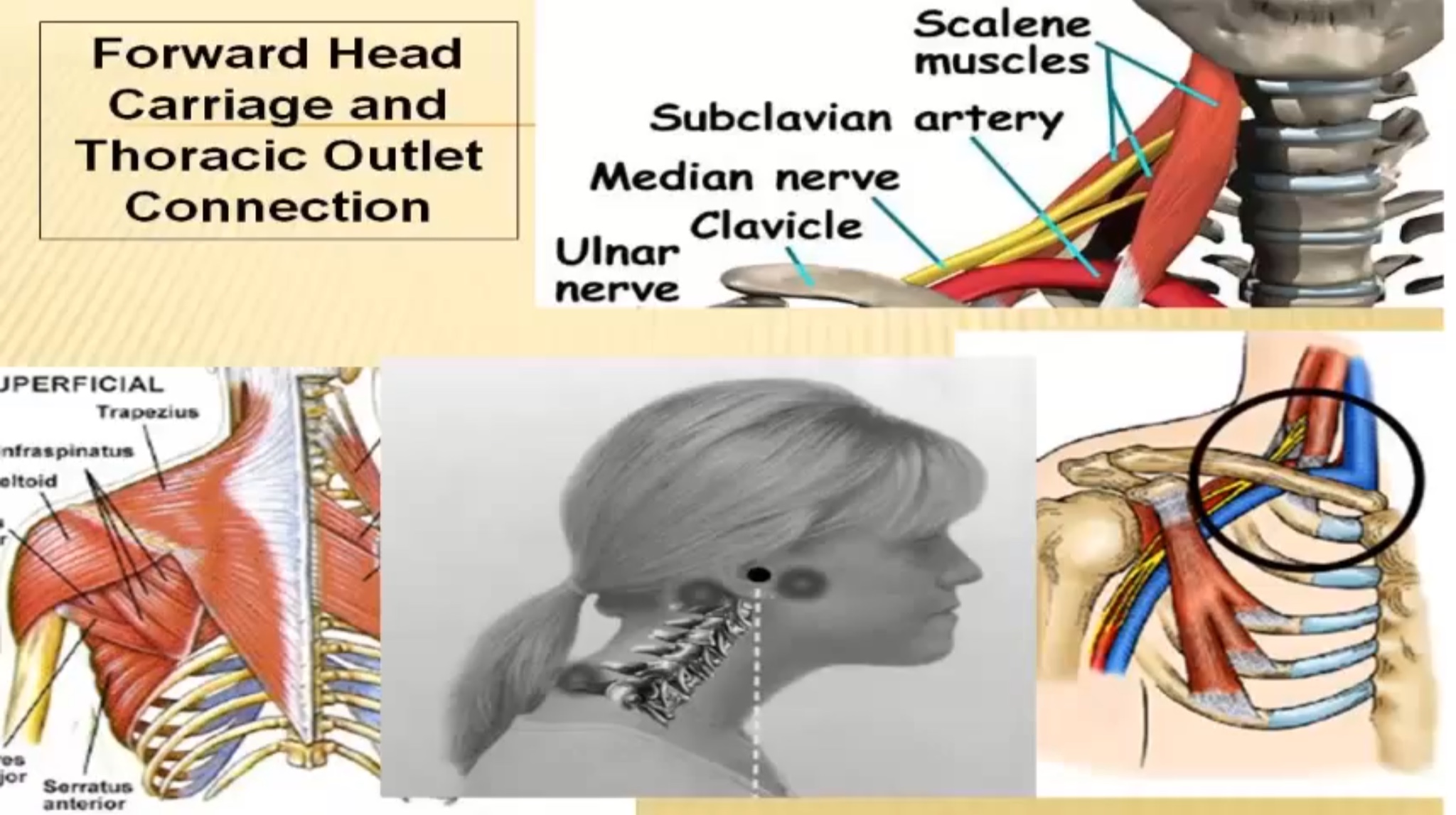 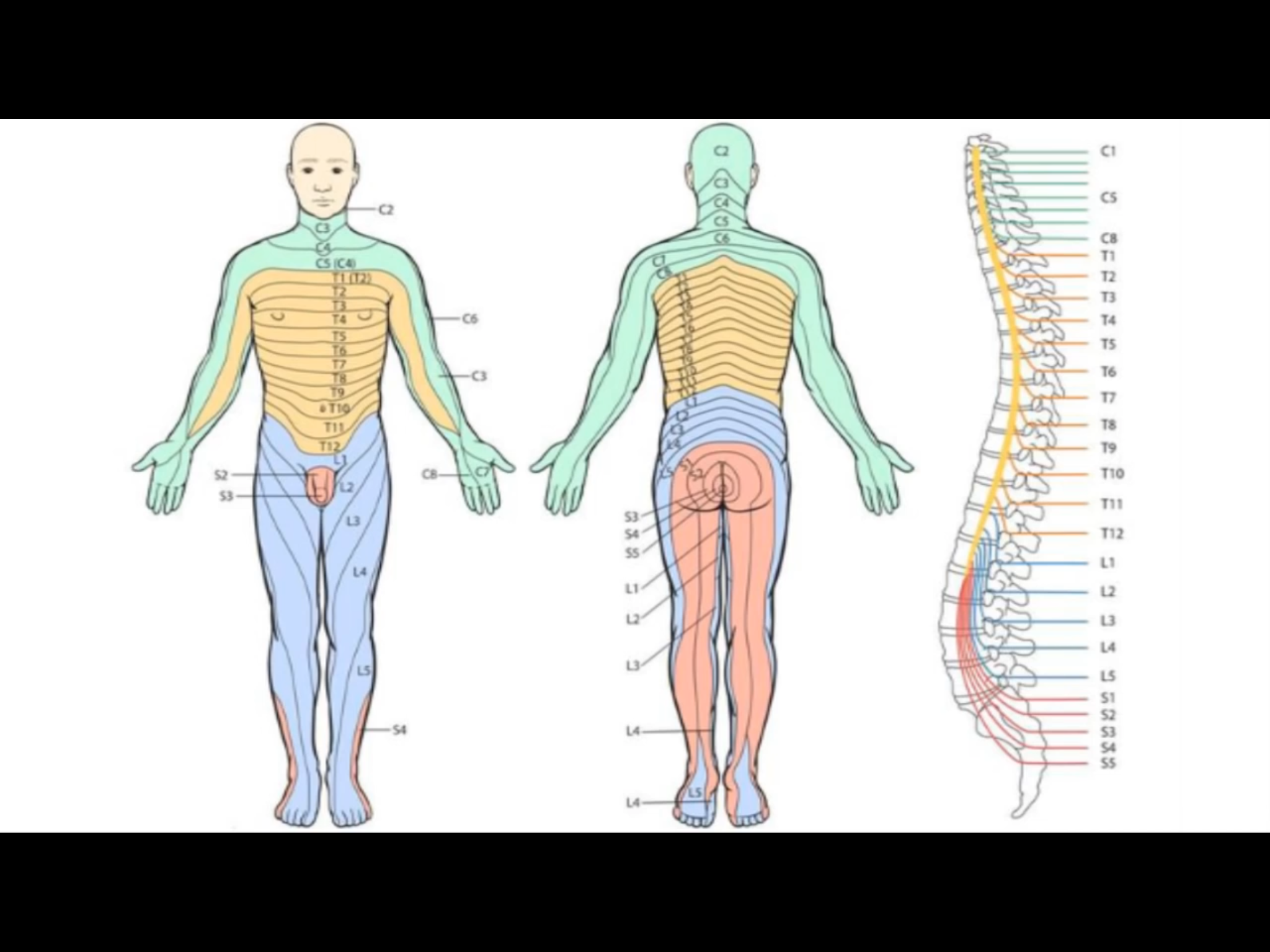 As you can see it’s more ‘volumetric’ than the other lines, meaning it encompasses whole muscle groups and areas within the body. In my practice I have found that this line more than any other is in need of loving attention. Even dedicated Yogis have issues in this line as it’s hard to access in a standard yoga practice. One has to understand it and have the intention of working with it in order to affect real change here.

The main DFL muscles involved in posterior tilt of the rib cage are the Illiacus, Psoas and Quadratus Lumborum. These muscles in addition to the shortened spinal muscles coordinate to pull the ribs down from behind thereby tilting the top of the ribs back. (See photo above titled ‘Sway Back Posture’).

When the ribs are tilted back, the shoulders are deprived of the foundation they need in order to function properly. The head tends to move forward or at least has that appearance, and the shoulders roll forward as well, (protraction of the shoulders). These two aspects of ‘posterior tilt of the ribs’ are what are so devastating about this anomaly. The nerve impingement caused by the head and shoulders being forward can leave us with headaches, shoulder, arm and hand issues.

The way to self treat for this condition is to lengthen your back body and your side bodies through stretching and to affect trigger point release through ball work. I love to use a knobby roller to get into the area just above my hip bones. This is a great way to treat Quadratus Lumborum in particular which is often a contributing culprit in a wide variety of low back syndromes.

Here are some hopefully helpful visuals of the muscles we’ve been discussing.

This photo shows the three main erector spinea muscles, Spinalis Thoracis, which is closest to the spine,  Longissimus Thoracis (highlighted), and Illiocostalis which is the muscle more distant from the spine. These muscles respond to trigger point therapy with a ball at the wall or on the floor. You roll the ball along the line of the muscle looking for particularly tender spots. When you find them, rest into those spots until they release. 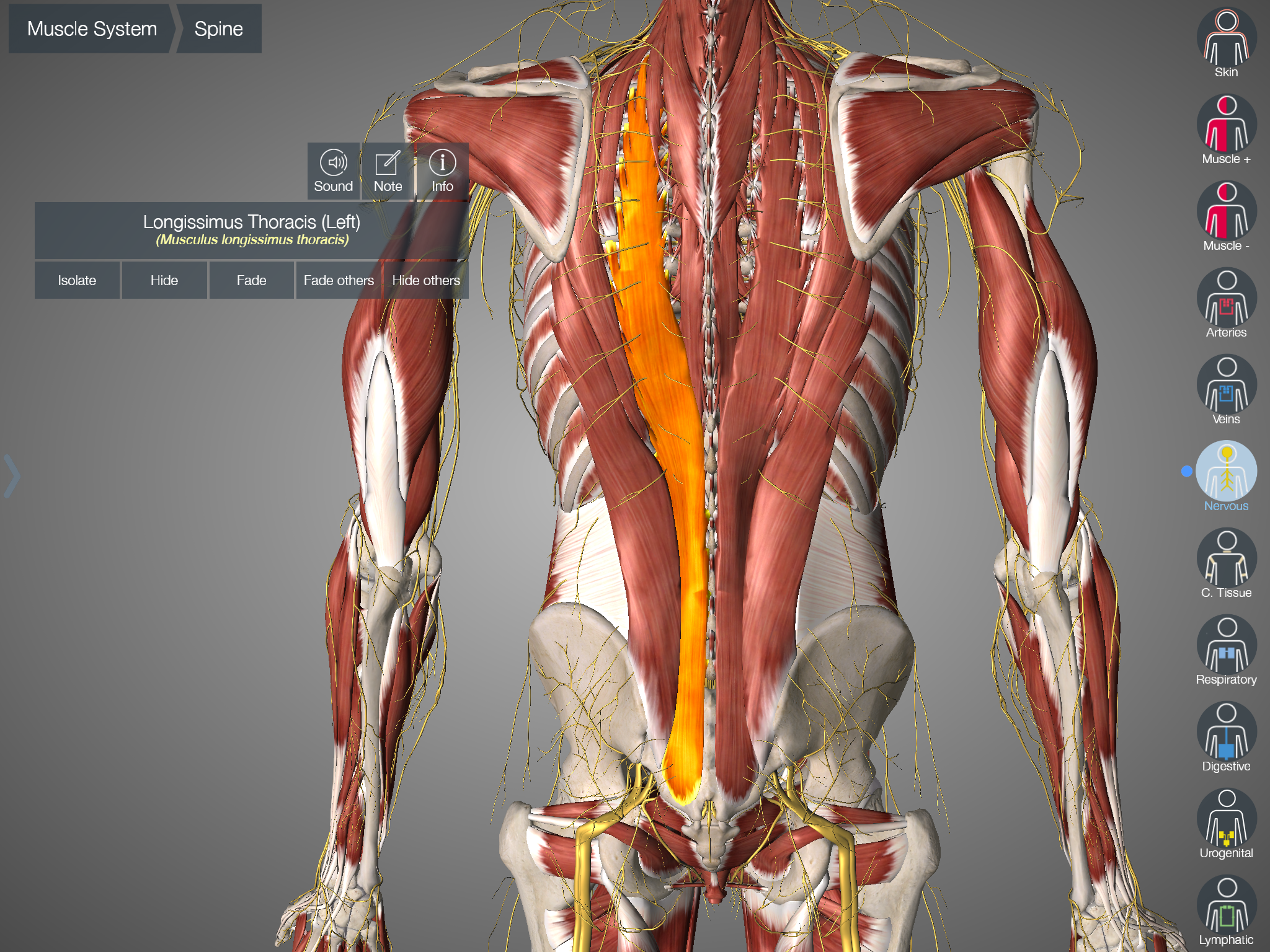 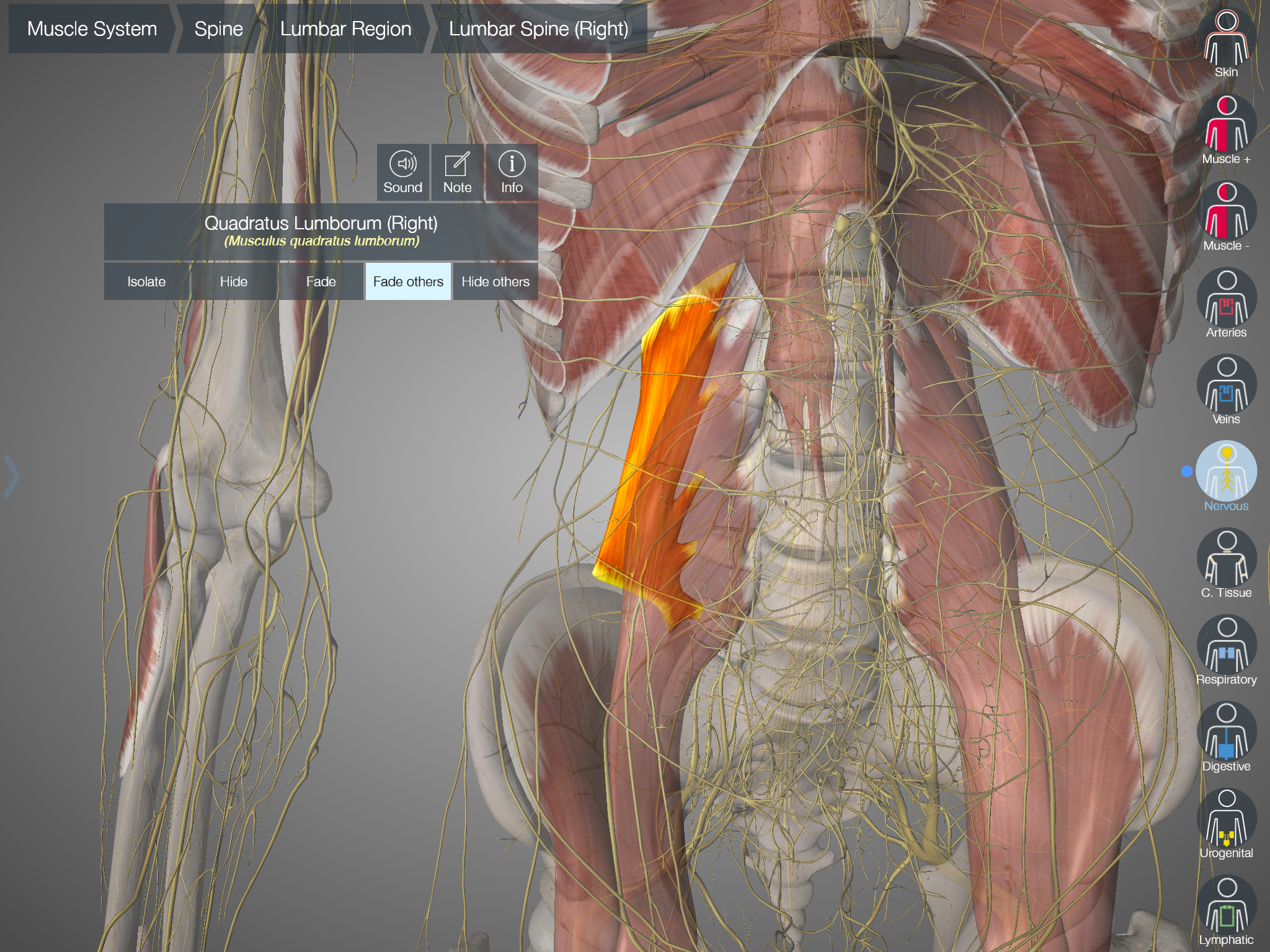 I hope this info is of use to you. Please contact me with any questions or concerns related to this article.